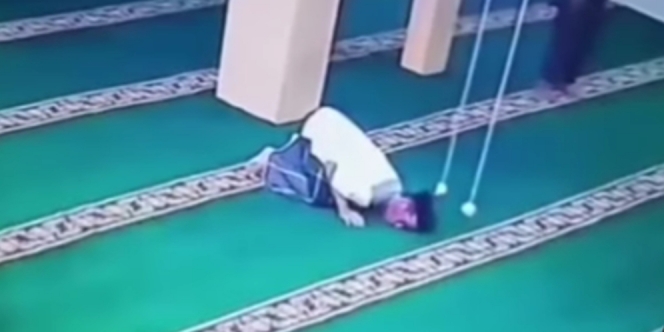 In the video, you can see a number of other worshipers who are praying in the atmosphere of the mosque not being too crowded.

Kalpen was seen praying in a standing position and performing the sunnah prayers before sunset without any obstacles. This was proven when Kalpen was still able to stand, then changed his position to prostrate.

When his head touched the prayer rug, Kalpen was no longer awake.

After that, another member of the congregation became suspicious and began to approach Kalpen, but was still observing him. Because they didn’t move, the congregation immediately crouched down and held Kalpen’s body. He seemed to be whispering Kalpen to his chest.

Even so, the congregation did not change the position of Kalpen who was still prostrating. Other congregants who began to realize immediately came.

Many residents entered the mosque and began to surround Kalpen. They tried to help the congregation who had died.

Wife Gets Snake Peck in the Leg, Her Husband’s Strange Action Makes Doctors Surprise | 1NEWS
Police Arrest Mice `Thief` Half Kilogram of Gold, Starting from Wrongly Given a Package | 1NEWS
So sad, this grandmother was just notified of the death of her son after the 1000th anniversary | 1NEWS
80 Funny Love Captions, Eliminate Anxiety and Make You Entertained | 1NEWS