Many think that Kaesang’s number is not stored by Gibran.

Dream – Kaesang Pangarep, the youngest child of the President of Indonesia, Joko Widodo, has just uploaded a conversation with his brother, Gibran Rakabuming Raka on Twitter. The screenshot of the WhatsApp application has become a hot discussion for netizens.

In their WhatsApp conversation, Gibran was seen conveying his wish for a birthday present for his first child, Jan Ethes. According to Gibran, Ethes asked for a PS5 gift.

Kaesang became shocked, seeing his nephew asking for the gift mentioned. He wrote “I just realized that Ethes can tell the difference between a CD version of PS 5 or a digital version. Not only that, Ethes also knows what game to play’” .

I just realized that Ethes can tell the difference between the CD version of the PS 5 or the digital version. Not only that, Ethes also knows what game to play. pic.twitter.com/IWiuGQHnJr

Apparently the conversation between the brothers invited netizens’ comments. Instead, they focused on Gibran’s empty profile photo.

“The mayor’s profile photo is empty, must you be sad, mas @kaesangp?,” wrote @WWZZET

Many thought that Gibran didn’t keep Kaesang’s number. There are also those who conclude that Gibran deliberately did not post a profile photo.

Why don’t Gibran use a profile photo?

Erick Thohir is known to have a stake in the pride of Solo wara club by placing Mahendra Ratherhan Thohir as Kaesang’s duet partner.

The surprise given by Erick was in the form of a luxurious dinner in a special room with the typical decorations of Persis solo. The moment of the banquet was shown by Erick through his personal Instagram account @erickthohir.

“When are you going to surprise the president’s son again?” write the upload caption, quoted Wednesday 29 September 2021.

Erick was present wearing navy blue clothes and seemed to be waiting for Kaesang to arrive in a room with a red table and cloth.

“Later, if you give this (thumb symbol), record it,” said Erick in the video.

The minister, who is also a businessman, looks very enthusiastic in welcoming the arrival of the youngest son of President Joko Widodo. “When are you going to give a surprise to the president’s son?” he continued.

After a few minutes, Kaesang, who was accompanied by several people, came to the banquet. Erick welcomed Kaesang who he invited into the room that had been prepared earlier.

“I don’t really care about Persis Solo, when you win, a special table is provided. It’s all red,” said Erick Thohir to Kaesang.

This figure is in the spotlight

It was not only Erick Thohir’s surprise for Kaesang that stole the attention of netizens. Many also highlighted the presence of Kaesang’s lover, Nadya Arifta.

In the video, the lover is seen wearing an all black outfit from head to toe. He stood behind Kaesang as he was about to enter the room. 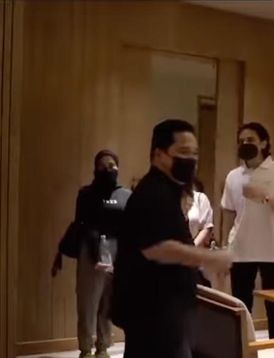 Various comments and reactions from netizens also filled the comments column for Erick Thohir’s upload. It is known, Nadya Arifta herself received the nickname ‘Bude’ by some netizens.

“The black astogoo, huh? It’s stuck like a stamp,” said another.

Media Practitioners Uncover the Role of the Cooking Oil Mafia

7 These Are Signs Your Partner Doesn’t Want To Make You Happy
Sheni Tania, who was full of achievements, got the title of Best Director General | 1NEWS

How Young People in Tabanan Reflect on Harkitnas – 1NEWS

Media Practitioners Uncover the Role of the Cooking Oil Mafia

7 These Are Signs Your Partner Doesn’t Want To Make You Happy
Sheni Tania, who was full of achievements, got the title of Best Director General | 1NEWS