Then the account claiming to be from the agency offered endorsed products for Jingga.

“Hi Sis, we want to offer the Zara leggings brand. You will have a 1 year contract with a payment of IDR 400 million,” said the JIK Agency account.

Jingga did not immediately respond to the offer because he considered it unreasonable. However, the account continued to greet Jingga and introduced himself as a talent hunt.

Jingga then asked what the terms of the endorsement were.

The account’s answer made Jingga even more suspicious because he asked him to take a picture in leggings and send it right away.

“The condition is that your photo is wearing leggings now with front, side and back poses. After we receive it, we will send you an email with your brother’s contract to study,” replied the JIK Agency account.

Jingga then asked for a sample photo of the conditions from the JIK Agency account. The account then provides examples of photos of other women wearing leggings. 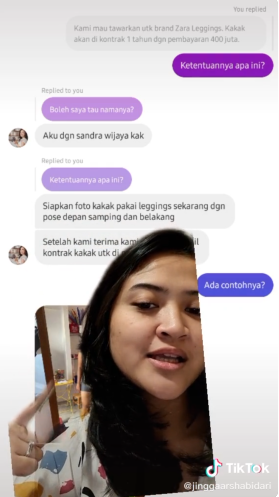 “He asked for a photo of me wearing leggings now. There is no product that has to be rushed right now. Usually there is a rate card,” he said.

Jingga admitted that he was sad because the account sent the requested photo sample. He felt sorry for the woman in the photo because she didn’t know it was a mode of harassment.

“Even though I’m not in the modeling business, I do have model friends. The saddest thing is that there’s an example of a photo but I don’t want to tell you, maybe the lady doesn’t know that this isn’t true either,” Jingga guessed.

275 Bawaslu Members Named to Be Cadre of Political Parties – 1NEWS

Strive for Bharada E’s Freedom, New Lawyer Do This – 1NEWS

This Artist is 56 Years Old yet Still Ageless! – Gossip

Airlangga: KIB Determined to Make Indonesian People Rich Before They Get Old – 1NEWS

275 Bawaslu Members Named to Be Cadre of Political Parties – 1NEWS

Strive for Bharada E’s Freedom, New Lawyer Do This – 1NEWS

This Artist is 56 Years Old yet Still Ageless! – Gossip